Dinner at One Pico in Santa Monica

We went to dinner at One Pico, a favorite restaurant of ours inside the Shutters On The Beach Hotel in Santa Monica. The best thing about One Pico is its atmosphere and ambience created by the Santa Monica beach and the Pacific Ocean's deep blue water just outside the restaurant's large windows. The interior decor is bright, airy and complements the great view. Yesterday, the weather and the sunset were simply magnificent! And as usual, the food was excellent and the service was gracious. We had a great time there being temporarily away from our parental obligations while Sophia stayed home with her grandparents.

What’s disappointing, however, was that they don't allow BYOB anymore. When I called ahead to confirm the corkage fee, the maître d' told me that the hotel "did away the BYOB policy a few months ago." Oh no! I planned to bring a couple of wonderful wines from home: a Krug Grand Cuvee and a '95 Bodega Muga ‘Prado Enea’ Gran Reserva. So how's their wine list then? Boring and uninspiring. It contains mostly of so-so Californian whites and reds, with a few well-known "status" wines in the red section such as Opus One, Robert Mondavi Reserve and Joseph Phelp's Insignia. Imported wine selections? Appallingly few.

But we didn't go there just for the wines (I consoled myself)...

For starters, we ordered a plate of harvest salad that comes with sliced apples, pecans and goat cheese. We paired it with a glass of L'Estandon Cotes de Provence Rosé (vintage unknown). We also had a bowl of roasted Santa Barbara mussels with saffron, chorizo and crostinis, which we paired with a glass of the Louis Latour Pouilly-Fuissé (vintage also unknown). The rosé was dry and pleasant enough, with fruity (baked strawberry?) taste, while the Pouilly-Fuissé was very refreshing with citric lemon-lime taste and a somewhat spicy finish. For a chardonnay wine, this Pouilly-Fuissé had no oakyness or the round, creamy malolactic mouthfeel that is generic in most Californian chardonnays. 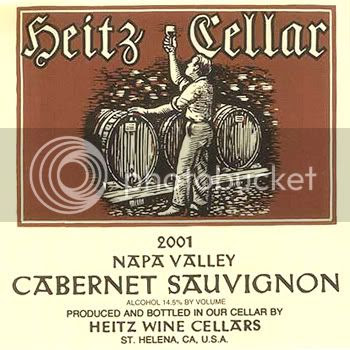 For the steak entrees, we ordered a bottle of the 2001 Heitz Cellar Cabernet Sauvignon, Napa Valley (~$40 retail, $110 at the restaurant). I found the wine to be a bit too round-bodied and supple for a CA cab. It resembled a merlot more than a cab, I thought. The nose was good though: blueberry pie/jam, dark chocolate, mocha, coffee, and some mintiness. The tannin was already mellow from the get-go, resulting in a creamy and supple mouthfeel. It went decently well with our steaks, though I wished for more oomph.

What a pity that they did away with the BYOB policy without revving up their wine list first. This is just against the wonderful BYOB culture that is quite the norm in Southern California's dining scene. Nevertheless, we had a wonderful time and meal there, despite the wines. I guess we could say that we washed our dinner down by drinking in the view.
2001 Heitz Wine Cellar Cabernet Sauvignon
Technical Notes
Varietal: 100% Cabernet Sauvignon
Appellation: 100% Napa Valley
Oak Aging: 3 years (One year American Oak tanks and 2 years in French Limousin Oak barrels)
Residual Sugar: Dry
Alcohol: 14.5%
Release Date: February 2005
by ~ Phyll on 2:47:00 AM

I've a friend who is from Southern California and is something of a wine-person himself. He's very used to BYOB and has a devil of a time adjusting to the rather backwards Wisconsin view of the practice. When college is in session and he's living in Wisconsin, we'll get together to go out to eat and he'll choose a wine he wants to bring along. Then he'll call ahead to ask about the corking fee, and be told that the place does not allow "carry-ins." I've tried to tell him that, in Wisconsin, the sad fact is that the eatery assumes you'll be bringing in a *cheaper* wine than they'd have on their list, not a *finer* wine, and reacts with corresponding territorialism.

He just hates this phenomenon, which is the "norm" where I live.

Tess, your tale is far from being pointless. For many diners who care about which wine they drink with their meal (perhaps a wine of special meaning), a BYOB-yes policy is a pro-consumer approach that in the end is good for the restaurant’s business too. It's a win-win situation, in my opinion. I mean, a $100 Joseph Phelp’s Insignia is a super wine, but for our special occasion, it has less intrinsic meaning to me and my wife than …say… that $16 wine from New Zealand, which is also super, by the way, but not available on the menu.

Wine is a *very* personal thing for many wine lovers. No eatery should presume that just because a wine is cheaper, therefore it’s inferior, and vice versa.

BYOB policy is sometimes not merely a "norm". In many cities, it is a legislated law. In Los Angeles, for example, the law generally allows BYOB and BIH (“bring it home” your unfinished wine), should the restaurant chooses to adopt the policy. In Boston proper, by contrast, BYOB is illegal in any establishment. Wanna do BYOB in Boston? Go to restaurants in Boston’s nearby suburbs.

Love their banana pancakes on a lazy sunday morning.