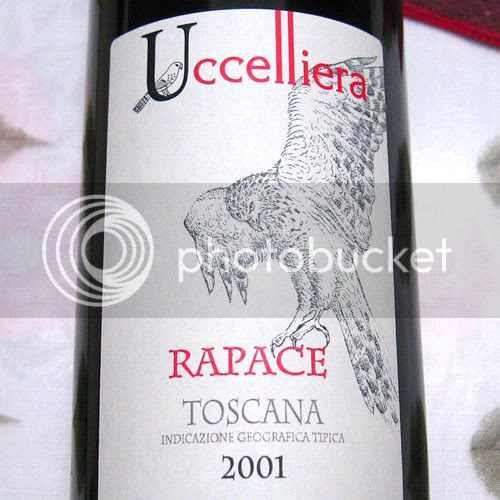 I won this 2001 Uccelliera Rapace from Winebid.com, an internet auction site. The Rapace is a modern style Super Tuscan made of primarily native Sangiovese varietal blended with “foreign” Cabernet Sauvignon and Merlot, and it is aged in small French barriques. Traditional Tuscan wines, on the other hand, never use Cabernet Sauvignon or Merlot, and they are aged in large old barrels (mostly made from Slovenian oak wood).

Uccelliera also makes excellent traditional Tuscan Brunello and Rosso di Montalcino. The winery is located just outside of a village named Castelnuevo del'Abate in the southeastern corner of the Montalcino D.O.C. (Denominazione di Origine Controllata). Its vineyards face the southwestern exposure. The 2001 vintage was considered an excellent year in Tuscany.

Intense, deep garnet color with a slight brick-ish red hue on the rim. The brick-ish hue had me worried at first that this wine had gone over the hill, but I was proven wrong. Focused nose of black berries, plums and a certain earthy notes. Fresh from opening, the wine was still very tight and tannic, so I decided to decant it. While decanting, I noticed that this wine had thrown some sediment.

An hour later, the wine had somewhat softened, giving a complex nose of casis, along with those mentioned above. The texture turned slightly softer and creamier. A certain improvement already.

About 24 hours later in the decanter, all the good aspects of the wine seemed to have melded together, giving it a certain complexity with an added touch of coffee and sweet eucalyptus aromas. Long finish.

I would give another year until I open the second of the 3 bottles I won. 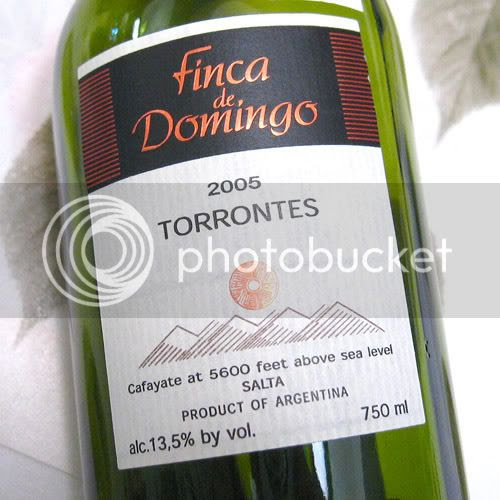 As part of Winexiles twice-monthly online tasting, I tasted something that I’ve never tried before: a wine made from the Torrontes varietal. If not for my fellow wino Bodegatejas, who is a professional grape grower, a winemaker, and a Spanish grapes maestro - from whom various wineries buy wine grapes - I would never have thought of trying this varietal, let alone knowing it exists.

“Torrontes......which produces a wine whose aroma is a tumultuous outpouring of tropical fruit, candied peaches, lychee nut, rose petals and other floral hints. Its flavors rush into the mouth, with bright ripe fruits similar to the ones found in the aroma, with an extra zing of spice and acidity for good measure. Needless to say, this is not a wine for the faint of heart.

Torrontes is a grape emanating from the Galician region of northwest Spain. There it is commonly used in wines from the sub-region of Ribeiro (not to be confused with the more popular wines of Ribera del Duero). Though you won't hear much about Spanish Torrontes, the same-named grape flourishes in the dry climate and mountains of Argentina. It is not clear whether the grape is identical in both countries, but who really cares? The main thing to remember is to look for Argentinean Torrontes, which has a strongly perfumed, distinctive character.”

The wine which I was able to find locally was the Argentinean example. I couldn’t find any Spanish Torrontes. An interesting note: the fruit that goes into this wine is grown 1 mile above sea level.

Muy bien! Color was clear, yellow-white. Immediately a nose of lychee and white flowers that reminded me of Alsatian pinot gris. There was this saltiness in the nose, as if I was smelling fino sherry. In the mouth, it striked me that this wine reminded me very much of the classic Tio Pepe Fino Sherry in its briny, ocean breeze character (no nuttiness as in Tio Pepe). The body was quite full, yet at the same time light feeling, as if it's foamy. Intriguing taste, but the finish was rather short. 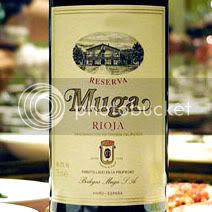 As I’m writing this post, I am also sipping my Spanish favorite: 2000 Bodega Muga Reserva, Rioja. The strange thing about it is that the wine is in its 26th hour of decanting and it has evolved beautifully! Why strange? A year or so ago when I opened a bottle of the 2000, it tasted quite beautifully right from the start (though far from reaching its maturity or peak). It was immediately elegant and approachable, showing balanced dark fruits, gentle oakiness with a hint of violet floral-ness.

I decided to open my last bottle of the 2000 last night and I was sorely disappointed, at first. The wine tasted extremely tart and tight. I was certain that the wine was still in a good shape and not yet over the hill. Color was fresh purple, with no hint of brick-ish red. Nose was of sour cherry and dark plums. Taste, however, was like esophagus-corroding acid...though not quite vinegary. I had about 5 sips and each one made my face cringe. I almost threw it all out down the sink, but I decided to decant it instead.

12 hours later, the wine softened a bit and was less tart, but it still was too tart.