Duvel, The Champagne of Beers? 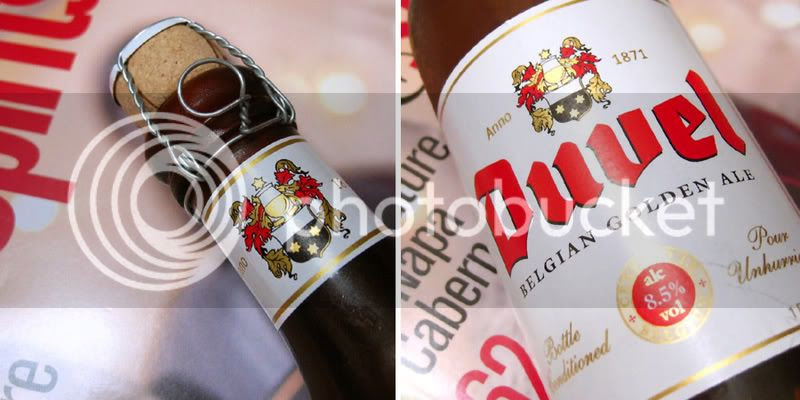 This post is about a Belgian beer called Duvel. It is one of the few beers that I'd make an exception of posting on my tea and wine blog. Duvel is clearly one the finest beers available in the market.

If the Belgians called their beers the Champagne of Beers, it would be less of an oxymoron than calling Darjeeling the Champagne of Teas. Why? Belgian beers go through the refermentation stage in the very bottles that you pour (or drink) out of, not unlike Champagne wines. Even the bottles are corked and secured with wires like Champagne bottles are. It is truly a pleasure to hear the POP! of the cork out of this bottle.

TN: golden-yellow and foggy with precipitates. I'm not accustomed to describing the taste of beers, but this one is definitely quite hoppy and balanced with enough maltiness. A delightful beer!

Beers can indeed be tough to describe. Sometimes after I get an initial impression of the beer, I browse http://beeradvocate.com for some other folks' descriptions and thoughts. I see what words they use and how they proceed with describing.

You should NOT pour the percipitates into the glass!!! :)

Pour SLOWLY and CAREFULLY and leave about 1cm of beer in the bottom of the bottle, more if it's a big bottle. The yeast at the bottom will change the way the beer taste.

By the way, downing it in 15 minutes is fast.

EvenOdd, I didn't know there is such a thing as beeradvocate.com! Thanks for letting me know! I'm not that big on beer, though I very much enjoy it once in a while. Pilsner Urquell is my go-to beer, usually.

Marshaln, really?! Wow...I never knew there is a beer that needs to be treated as such! I thought the cloudiness is from precipitates that won't settle down (homogeneously integrated). I'll try it again per your instruction next time. Thank you! Goes to show how ignorant I am about beers...though I know how to chug it real quick! :)

Alright. You're all in my territory now. :)

I suggest Ratebeer in addition to Beer Advocate.

If you pour the yeast along with the beer (not the big chunky bits, but a little cloudiness) you'll get a much more complete taste. It's what the brewer intended, and unlike wine, it's actually quite good. And, if you find that you've imbibed more yeasty beer than you should have, the yeast has A LOT of nutrients to help fight that impending hangover.

If you would like some more suggestions for Belgians that you can try, shoot me an email and I'll see if I can figure out what you can get that's decent. Good beer is hard to find. Sometimes, I think, harder than good wine.

I think the yeast thing is kinda hit or miss, and with Belgians I tend not to pour the yeast. With hefeweizens I do. I find the Belgians can get a little unpleasant sometimes if you pour all the yeast into the cup. Some is fine.

So I bought another bottle of Duvel and I let it stand upright in the fridge for a day. I could see the yeast on the bottom of the bottle and the beer above was clear. I poured the first half of the bottle sloooowly so as not to disturb the yeast. The color of the beer in the glass was clean and clear yellow. The taste was crisper and refreshing. It kinda reminded me of Pilsner Urquell, actually.

Then I poured the last half out completely with the yeast. This time the beer was cloudy yellow. Taste wise, I thought the cloudy glass was better! There is some added complexity to the taste (fruitier?) with the yeast in the beer.

An interesting comparison, nevertheless! Thanks, marshaln and buzz, for the insights. It sure was a fun experiment.

Ah yes, most of the fun in beers and wines is in the "experimentation" isn't it? :)

I think I stopped pouring out the yeast when one time Duvel went bitter on me with the yeast in the cup... I didn't like it.

I see. It's all personal, I guess. I like my beer sufficiently bitter-hoppy, though not too hoppy. I think the bitterest beer I had was a bottling called Arrogant Bastard, and that was too much for me. One US beer that is quite hoppy and I thought excellent was called Hopzilla IPA.

Thanks for the link, buzz. I'll browse that site for reviews of beers I've had.

Hi Phyll, greetings from Minnesota. In Scandahovianland, we have a restaurant that has various Belgian ales on tap, as well as an array of Belgians in the bottle. If you have a chance to taste a fresh Belgian from a keg, it will be a near religious experience.

Phil, thanks for the comment. Can't wait to try it straight from the keg. If you catch this question, do Belgian beers get cellar aged in the kegs sur lie too, like the bottled ones?

I had Czech beers on tap, and every time I had it was pretty awesome.

It is only allowed to pour 1cm of yeast into the glass.

correction: you have to leave 1 cm yeast in the bottle!

I hope that 'yeast' is the correct english term for what I think it is. but you can see it in the film i linked to, also in english