Something strange happened over Los Angeles last weekend. Tiny droplets of water fell from the sky and soaked everything wet. The TV called the phenomenon "rain" or, even scarier, "thunderstorm" on Friday. I stayed mostly inside until it was safe to go out.

During this "thunderstorm", I experimented with the Japanese Sencha samples that came from T Ching. The Sencha teas are named Tenbu ("Dance in Heaven") and Tenbu Fuka ("Dance in Heaven Profound"). The one with the Fuka designation is the higher end of the two. Many others also received the samples as part of T Ching's monthly online tasting event.

I have never had Sencha before and I must admit that my knowledge of Japanese teas at this moment is pretty much nil, if I don't count the supermarket genmai-cha, mugi-cha and the restaurant Yamamotoyama brand bagged green tea that I often had with my Japanese roommates back in college days. 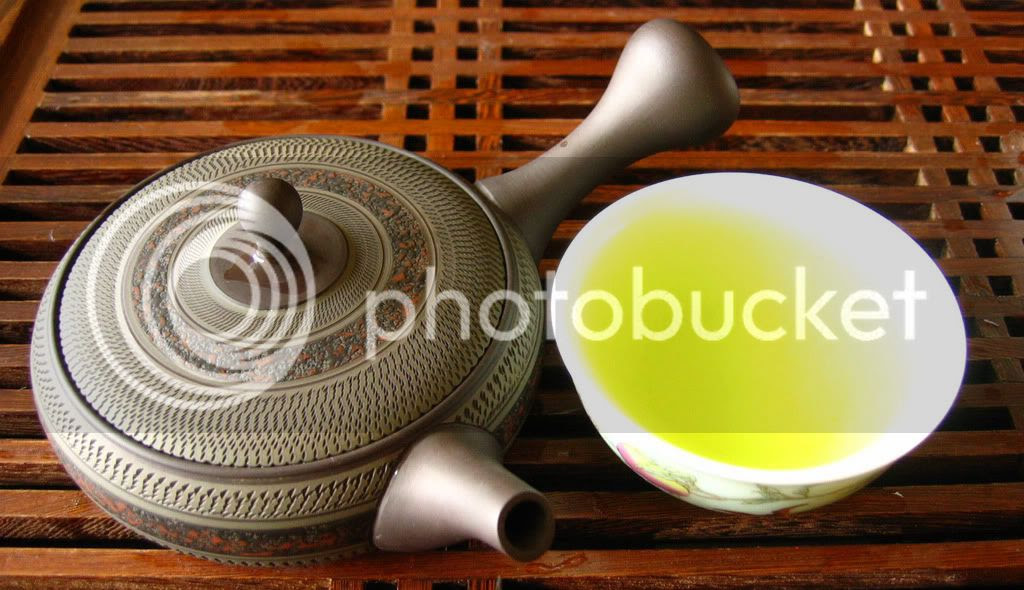 Dry leaves
Deep emerald green, healthy and fresh looking. The leaves of both samples were visually similar. While there was an equal amount of fanning, those that were not were quite short in length. Is such brokenness representative of both teas’ original condition, or perhaps it was broken in transit?

Highly fragrant! The smell was savory, buttery, green and sweet all at once. I noticed that the Tenbu Fuka’s nose was sharper and had a slightly higher note than that of the Tenbu. Both reminded me of a delicious Japanese food seasoning (not diced seaweed). I was almost tempted to sprinkle some on top of steamed rice and eat it as is.

In summary, by looking at and smelling the dry leaves alone I was hard pressed to find any differences between both teas. 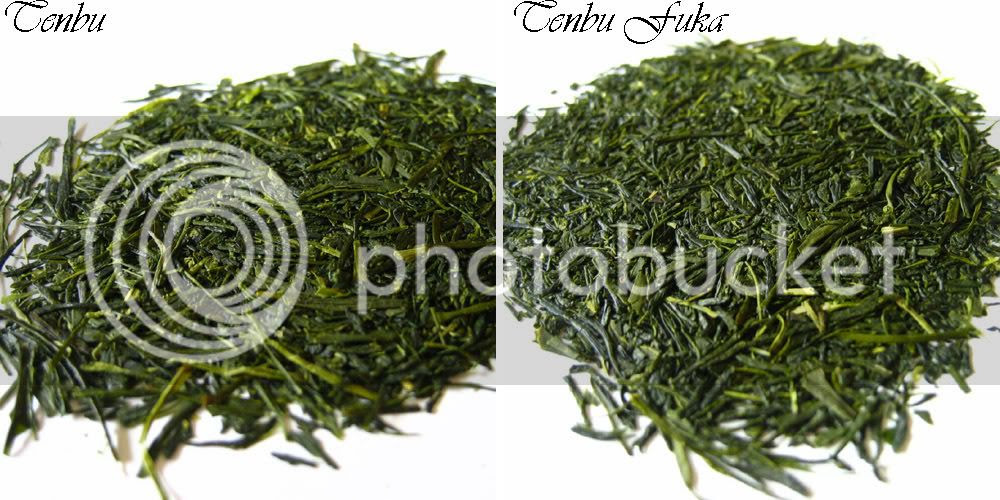 Tasting Notes
There was a considerable amount of soft fanning that flowed out of the brewing vessel into the cup (unfiltered). Not liking that much tea dust, I employed a fabric mesh filter, which became clogged halfway through pouring out of a gaiwan. The new Kyushu teapot that I purchased from T Ching has a built-in metal strainer that kept the fanning in the pot quite effectively. I wonder if customarily this tea is served with a lot of tea bits in the cup or not.

Tenbu: The first infusion was light green in color and the liquor was cloudy. It tasted vegetal with a creamy sweet undertone and buttery texture. The second infusion was bright, limey green and stronger and thicker tasting than the first, which made the tea rather soupy. The third infusion was weaker and more balanced in my opinion. The fourth and fifth infusions were watery. I enjoyed the 1st and the 3rd infusions the most out of each five-cup session.

I should note that I felt my mouth and lips as if coated with grease, though I believe it is due to the polyphenols, the amino acid (L-theanine?) or both. The texture was present at every session I had, whether the tea was brewed in a clay teapot or in a gaiwan.

Tenbu Fuka: Similar tasting note to the Tenbu in most respect, except it was slightly more vegetal.

Conclusion
I was quite surprised to find that the second infusion yielded a stronger and thicker cup of tea than the first, despite the fact that brewing time was cut to one-fourth of the first. By the third brew, the tea was weaker than the second, but was still enjoyable. The fourth and fifth brews were too watery.

Having no prior benchmark against which these Sencha’s can be evaluated, I would defer any attempt at scoring until I have tried and experimented with more teas of the same genre. For these samples, I loved the smell of the dry leaves, though I found the tea too vegetal for my preference. The presence of too much tea leaves in the cup was also rather hard to enjoy.

Thank you, Michelle and Sandy (of T Ching), for the tea samples and the opportunity! This was an eye-opening -- or rather a mouth-watering -- experience.
by ~ Phyll on 5:30:00 PM

Your description of a Southern Californian's reaction to rain is perfect. When I noticed it was raining, my first thought was "What the fuck is going on?" Thumbs down for rain.

I love the pattern on that teapot. The rings of hash marks make for a really nice design.

Is Volvic a rather high mineral water? I'm wondering why the leaves are floating in the gaiwans like that. After a bit of swirling they all settled on the bottom for me.

xdustinx - I thought global warming has brought the monsoon here from India.

Steven - thanks. It's quite a nice teapot. I'm warming up to it.

Volvic has the least total dissolved solids (TDS) out of the water that I usually use for my tea.

And then I checked Los Angeles Department of Water & Power's annual water quality report (2005). Turns out that LA county's average TDS in its water is between 193 and 468 mg/l, depending on which filtration plant the water comes from.

Great stuff! All the best photos were hidden behind those links, waiting to be discovered!

Gentlemen, if you want rain, I have just the place for you... ;)

P.s. The residue in Evian is evident from a single use: my gongdaobei was covered in white streaks after use, and the kettle took a fair clean to remove the sediment. It's definitely one to avoid, unless there's no alternative.

Why thank you, Hobbes. I really look up to your ability to capture beautiful images and write elegant tastig notes.

Ladies and gents, if you haven't, do visit Hobbes' excellent blog, which I highly recommend.