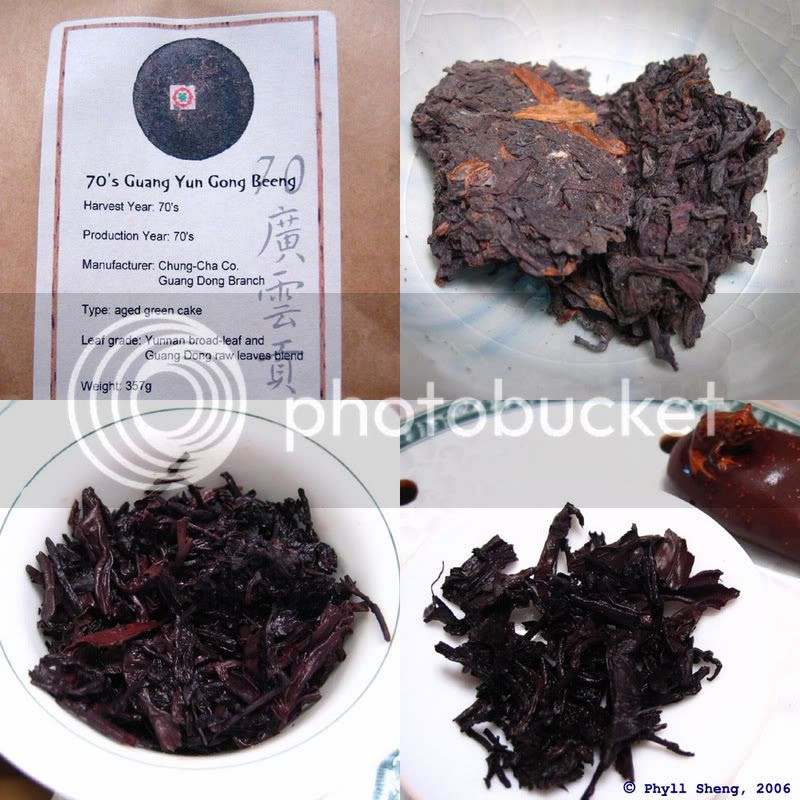 A Brief Background
Guangyun Gong, or Guangdong – Yunnan Tribute tea, is the name given to this production to commemorate the trade relationship between the two provinces. Produced by the China Tea Co.’s Guangdong branch (中茶), the first batch of Guangyun Gong was released in 1958. Up until the end of the 1960’s, only raw Yunnan arbor leaves made up the series. Starting in the 1970’s, however, tea leaves from other provinces such as Sichuan, Guizhou and Guangdong, among others, were used in the production of Guangyun Gong. This was due to changes in the inter-province tea distribution structure in the 1970's when the Yunnan tea industry was given the rights to distribute their own teas and, as such, they were no longer required to send raw materials to the central distribution hub in Guangdong. Consequently, Yunnan arbor tea leaves became harder to obtain in Guangdong, so China Tea Co. began mixing raw materials from other abovementioned provinces.

Per Mr. Chan Kam Pong, Executive Editor of the Art of Tea publication, the 1970’s version is referred to as “Guangyun Tea Cake” and it is regarded as inferior to the highly sought after 1960’s “Guangyun Royal Tea Cake”. 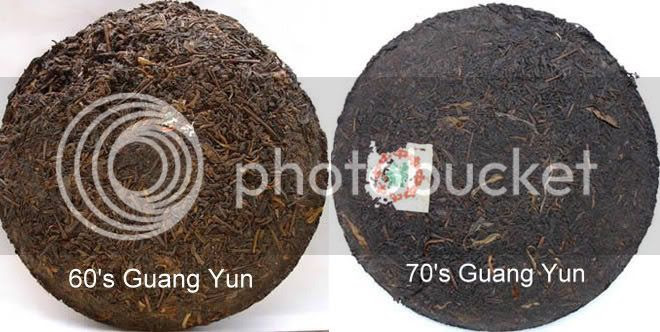 I do not know how the 1960’s Guangyun Gong tastes like compared with the 1970’s version, which I thought was an interesting education piece. I wonder whether Yunnan arbor leaves really are/were superior to leaves from other provinces (I mean the leaves used in Guangyun Gong), or if it is merely a puristic perception.

Color: medium brown at 1st and 2nd infusions, then becomes darker brown until the 8th infusions, when its color descends to become lighter. “Bao guang” (yellow halo surrounding the red-brown liquor) is present throughout.

Exceptional clarity from the first to the last infusion. This, I believe, is one of the characteristics that sets an aged sheng pu’er apart from a shu pu’er. As dark as the liquor becomes, it retains its crystal clear clarity, whereas a shu pu’er tends to get opaque and/or cloudy.

A whiff of Chinese herbs…ginseng being the most recognizable. This is accompanied with an earthy, mushroom-y, and toffee-like nose. A subtle sweet sensation is well integrated and felt on the side and back of the tongue. This is not the same kind of sweetness that a decent shu pu’er gives, which tends to be more obvious. Nor this is the sweetness that one gets from a black tea, which tends to be bitter at first then turning to a sweet finish. A hint of metallic taste (iron?) is present. This tea doesn't turn bitter even with prolonged brewing. Medium body at first, and later infusions are fuller (as the color of the liquor became darker). This tea is very smooth with tannins that is almost non-existent.

There is an obvious cooling sensation in the mouth and throat. A soothing feeling also goes down to the stomach and lasts for a few hours.

I felt a blanket of warmth by the 4th infusion, and the sensation grew warmer especially on my back, shoulders and neck. By the 8th infusion, my body felt sufficiently hot. It’s a very relaxing and calming experience. I’d attribute this sensation to good cha qi.

This tea may be a turn off to those who dislike the smell and taste of Chinese herbs/medicine, but I mean it in a pleasant way. I generally dislike the taste of Chinese medicine, too. However, the herbal / medicinal quality of this tea is inviting and soothing. An excellent tea all around.

Thank you, BBB, for the sample!

Yours looks much better than the sample I got, which was not good at all.

Mine was aged, for sure, but it doesn't taste that great, and has suspicions of being poorly stored with yellow mouldy spots on it. I don't know.... I have a feeling some of the cakes were not stored quite well, and thus different parts of the cake (or different cakes) have different characteristics.

Being an old tea, variations must abound depending on the quality of previous and current provenance. Houde is offering the GYG beengs in different batches, so as to point out the potential taste/quality differences. Currently, Houde is on their 3rd batch.