Part II: Prior to the Event

On February 27, I received an email from Guang titled “Need Your Opinion”, in which he asked for my recommendation on places to host the first USA Pu’er Tasting Event at. I told Guang that the better place to hold such a cultural event, in my honest opinion, is in San Francisco for many obvious reasons. While uttering that, however, I also thought that Los Angeles could potentially be a great place. So I suggested that he contact his SF acquaintances for their recommendations while I turn my wheels for the venues in Los Angeles.

A day later I came up with four ideas (alpha, in no order of preference):
1. The Chinese American Museum in downtown Los Angeles (C.A.M.)
2. The Descanso Gardens in La Canada (D.G.)
3. The Huntington Library in San Marino (H.L.), and
4. The Pacific Asia Museum in Pasadena (P.A.M.)

The P.A.M. was available to host us in mid-June. It was unclear whether or not C.A.M. has the facility to host a third-party function (they never returned my calls). The D.G. and the H.L., unfortunately, were already fully booked in June. My heavy favorite at the time was the D.G. for its beautiful outdoor settings. However, when I scouted the P.A.M, I was very pleased with how the museum's courtyard feel and look. I immediately told Guang that the P.A.M. would be the perfect venue to hold his pu’er party at should he commit to having it in Los Angeles.

After Guang received many photographs and videos of the museum from me, and after he found out that such a beautiful Qing-dynasty style courtyard can be rented for only a fraction of the price of another Asian oriented museum (forgot which) in SF, he finally made his decision and booked the P.A.M. for the June 16th engagement. Well, it was just my luck, I thought…I wouldn’t have to travel far after all! The P.A.M. is practically a 10-minute walk from my office. 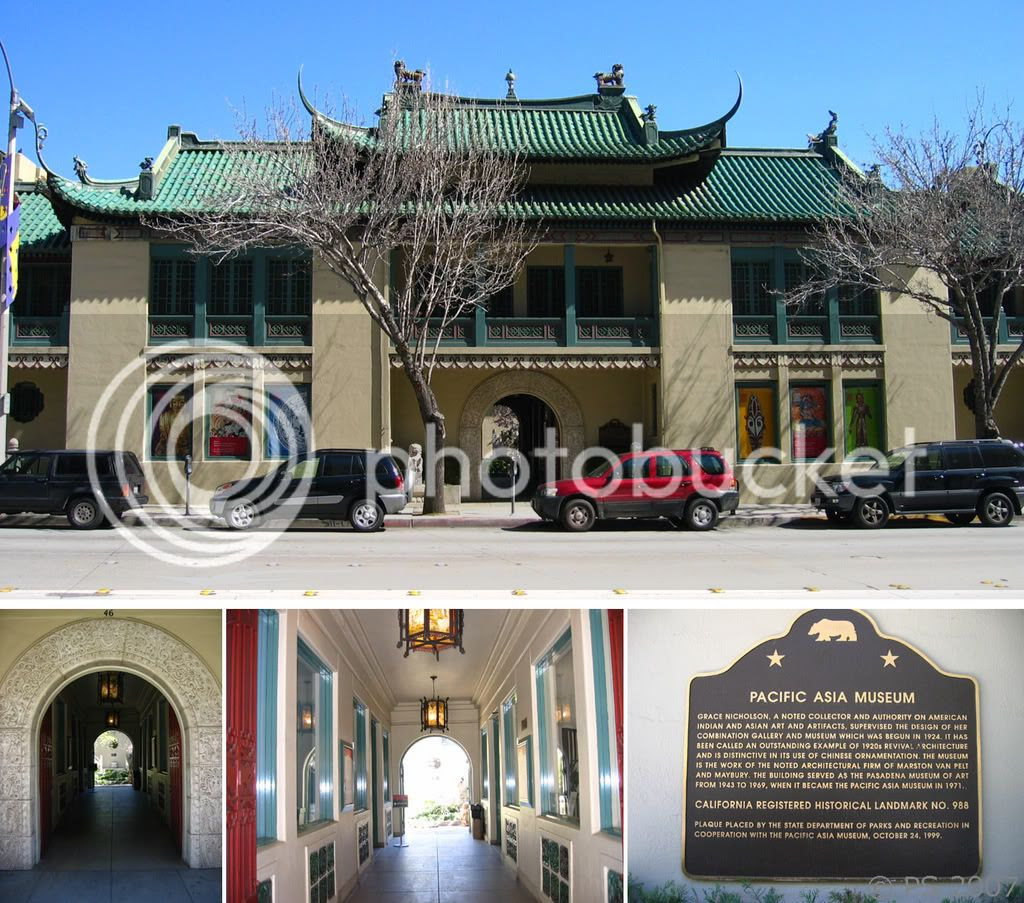 Thereafter, Guang and I were out of contact for a few weeks. I was under the assumption that he knew someone else who could organize the party on his behalf. I mean, after all, he only asked for my suggestions about the venues.

In mid-April I contacted Guang to ask if everything was underway. His reply, to my surprise, was that he hoped I could help with the organization of the event. I was hesitant at first, although I was also quite piqued by the challenge. Besides, the event was still 2 months away from then, so the preparation could still be done at a somewhat leisurely pace. He and I immediately took on the project together and we consolidated our vision.

During the ensuing 2 months, we slowly and carefully planned the project. Among other things, I selected the tables, chairs, linens, bowls, trays, utensils, umbrellas, etc. from the rental company’s wide selections. We wanted it to be understated yet elegant. Guang was in charge of inviting the guests and announcing the event to the public. We also figured out the logistics on how to get the tea utensils from Houston to Los Angeles.

My meetings with Gabriella Karsch, the Director of Events at the P.A.M., were always constructive and pleasant. Through her, I was introduced to vendors that P.A.M. had prior satisfying experiences with. She also made sure that I did not forget the little details that may have been unintentionally omitted, such as knowing the power limitations of the museum. This was resolved by renting an extra power generator to make sure that all 5 power-hungry electric kettles could run concurrently without blowing any fuse. My gratitude towards Gabriella is overflowing. 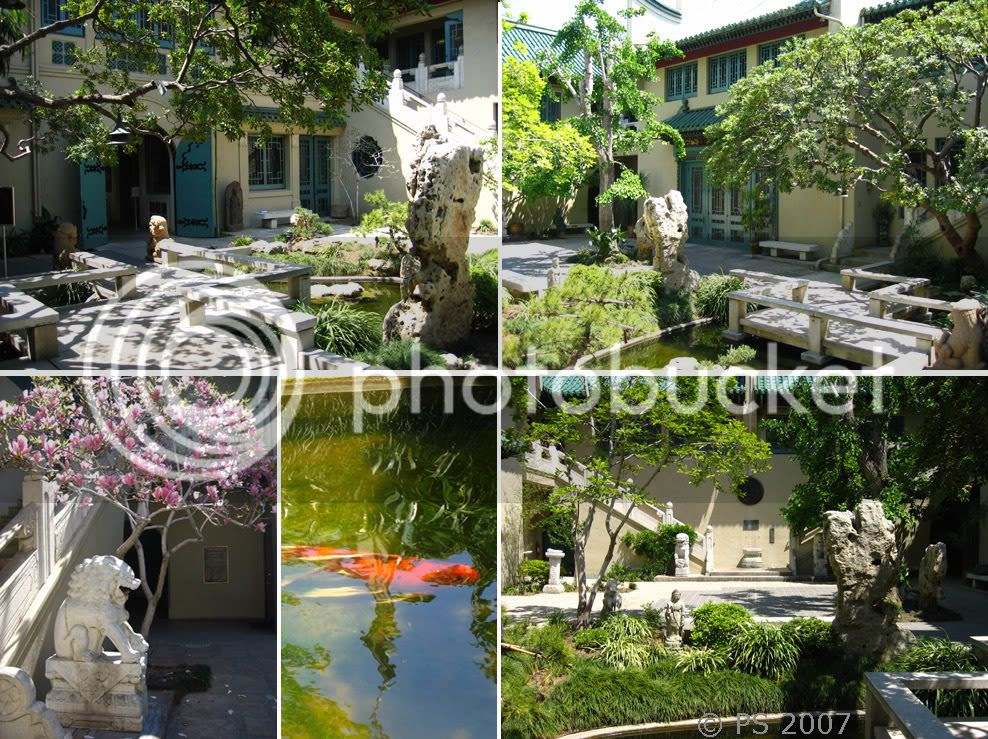 Everything was under good control…that was until the day before the event itself. Crises ensued on June 15th due to the fact that FedEx failed to deliver the six poster-sized pictures that I had ordered for enlargement. To make matter worse, on that same day and at the time when I should be sprinting to a nearby Kinko's to get the posters re-printed, Aaron Fisher called to let me know that he was stuck at the Greyhound bus station on Alameda and 7th Street (not a good part of our city). Apparently, his bus from SF to LA had broken down on the way, and so he missed his connecting bus that would have taken him from downtown to Pasadena. The two crises were resolved eventually, but not without much angst and cash. It costs 4 times more expensive to re-print the posters at Kinko’s than at Snapfish (an online photo vendor).

After picking Aaron up at the downtown bus station, we immediately headed towards the Hilton Hotel in Pasadena. We chatted and got to know each other better while waiting for Guang, Liang, Apple and Chen to arrive at the hotel. It was not until about 10pm that they finally showed up. This was to be my first meeting with Guang, the man who I have corresponded with for the past year or so, but only through emails and phone until that day. We were mutually happy to have finally met each other in person.

I was invited to Aaron’s and Guang’s room to further plan the next day’s kick off. To whet our tired and dry beaks, Aaron brandished his small silver teapot (“Such an ugly teapot,” Guang said jokingly) and started brewing his stash of 1930’s sheng pu'er that is made entirely of small gong-ting buds. We used one of Guang's electric kettles to boil some bottled water.

While sipping on this extremely smooth, rounded and naturally sweet tea, we talked about what was going to happen tomorrow. Everyone was anxious, and especially me because there were still many important errands on my to do list that I had to accomplish before arriving at the museum.

I left their hotel room at around half past midnight and reached my home at around one o'clock. I was exhausted by then and no longer had the energy to be anxious any longer. But I remember that I was still enjoying the aftertaste of Aaron's 1930's pu'er. The sweet taste in my throat lingered for a long time and I felt as if my esophagus all the way to my stomach was coated in a light mint-y sensation. It was quite a pleasant feeling.

Tomorrow (well, that same day to be exact, since it was past midnight) was going to be a long, exciting day…that was if I could manage to complete my long list of tasks before 12 noon!

During the event, I had to constantly watch out for the time and scheduling, and made sure things went well as planned. I only realized how pleasant the day was (and how I could have had more fun!) when looking back.

I should have asked Imen, Will or Louise to handle that table, instead letting myself running like a fly.

Wooo... how I miss the most fabulous weather, and those most positive and happiest people!

You are such a wonderful person to work with (or for!) If you ever have your own company in the future, I will definitely send in my CV, he he he

No matter how busy I was before the start of the event, when it was time to brew the teas I just totally forgot about everything and somehow was able to focus only on the teas in front of me. I had a relaxing and enjoyable time with everyone at the table. The weather couldn't have been more perfect!

It was great working with/for you, too! Thanks for everything!