These were some of the wonderful Greek dishes I had with my family in the later half of yesterday. Not exactly a traditional Independence Day fares, which usually involve lots of BBQ’s, beers and red Californian zinfandel. Let's just say we celebrated the 4th of July the Greek-American way at a popular local Greek restaurant not more than 5 minutes from where we live, called The Great Greek. 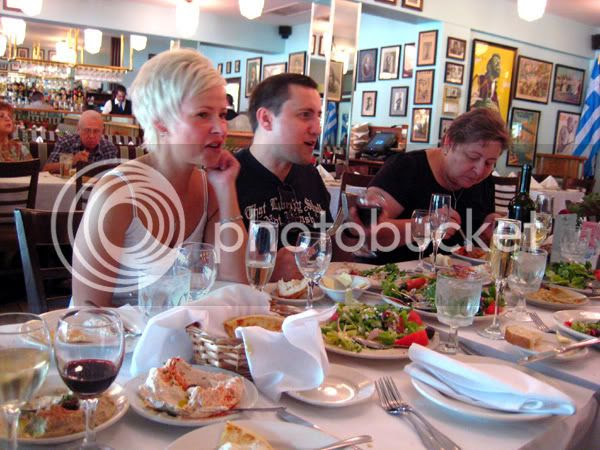 A bottle of Veuve Clicquot Champage got our appetite going as a starter beverage. And then a red 2005 Amethythos and a white 2006 Kouros accompanied the sumptuous Greek feast we had.

The non-vintage Veuve Clicquot Ponsardin is a nice standard fare Champagne…toasty, yeasty, with fine bubbles. It hit the spot well. 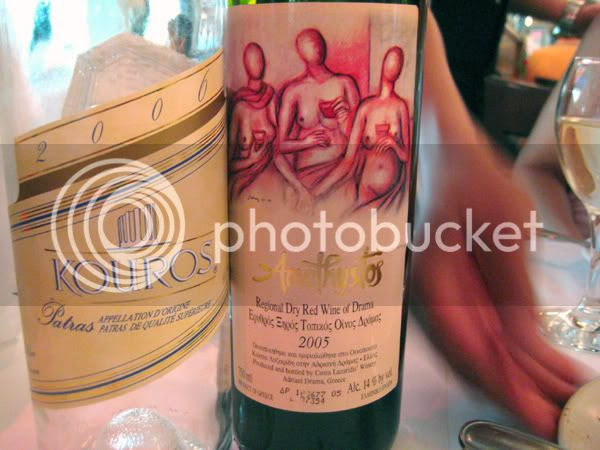 The 2006 Kouros, a white wine made from Rhoditis (aka: Roditis) grape variety, is from the southern part of Greece near Patras. This wine tasted dry and a bit citrussy, which went very well with the first course dishes of Greek salad, various creamy, whipped dips and other meze. It reminded me of a simple but pleasant Californian Sauvignon Blanc table wine. 2 stars (quite good).

The 2005 Amethystos from Adriani, Drama, is a blend of local Cabernet Sauvignon, Merlot, and Limnio, an indigenous Greek red wine grape variety. This wine apparently was aged in large, 225 litre French Limousin oak barrels for a year before being released. Lots of blueberry, some earthiness, talcum, and a bit of good funk. The tannin is quite pronounced, and the oak soft and judicious. Quite delicious. 3 stars (good, recommended).

I ended the meal with a plate Galaktobouriko, which personally was a bit too runny and salty for a dessert. A cup of super concentrated Greek coffee with a side of sticky sweet compliment called Loukomi ended the meal.