Something special deserves its own moment. When it comes to a unique tea, it means finding a calm and casual window of time to savor it. The morning of July 4th was such that I decided to open a small package from The Tea Gallery containing 25gr of 1950’s Shui Xian oolong. I’ve been meaning to try this old tea out since it arrived 2 weeks ago, but a calm enough morning has been a rarity these days.

Upon opening the packet, I dived my nose into the mylar bag and took a few short, successive sniffs. There wasn’t much to nose about, however. Whatever mild scent present was reminiscent of old parchments with a hint of something sweet.

The leaves were quite broken, with about equal amount of larger-sized ones and the small bits. Five or six decades of handling and storage tend to do that to lightly rolled tea leaves. There were also about an equal amount of brown and black leaves in the mix. The black ones have some sheen about them.

This was to be the oldest Wuyi oolong that I’ve ever tried to date. 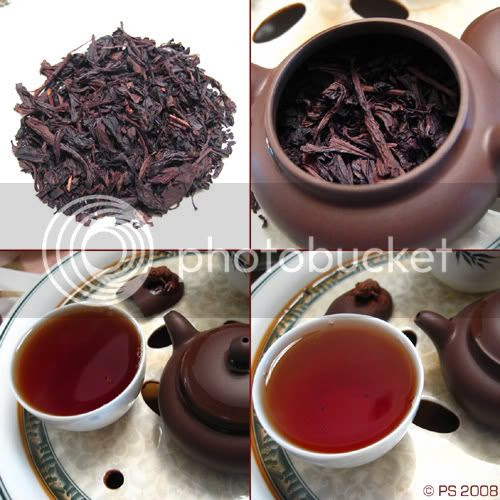 I filled my small, thin-walled 75ml Yixing pot half-full of dry leaves (1/2 full is a personal preference when it comes to Wuyi teas). I did everything carefully, as one would when handling something so old and fragile. I poured the water gently, in small stream, aimed at the rim of the pot’s opening so as not roil the leaves within.

The pre-rinse was done in a flash, and the resulting liquor was muddy, dull dark-brown…not pretty, but it reinforced the perception of its antiquity somehow. I drank the pre-rinse and it felt clean, light and airy, with a taste of old parchments (again). It was very smooth, though not much else.

The next infusion yielded a less muddy tone, and subsequent infusions thereafter would yield redder and clearer tea soup. By the second brew (third, including the pre-rinse), I suddenly felt quite woozy. The force was strong with this tea, and so I stopped to take a bite of sustenance before proceeding further.

On the third brew, suddenly this tea seemed to have awakened from its long slumber. The liquor became tastier and the aftertaste more pronounced. Though I wouldn’t regard it as complex tasting, in its simplicity and straightforwardness hid something pleasant, and that is the chaqi and its ability to leave a lasting aftertaste. With each sip, after the liquor slid down the throat smoothly, the ghost of it produced an intense salivation effect that left a long, sweet aftertaste. It’s a wonderful sensation altogether.

As with the pre-rinse, all subsequent infusions remained light, airy and extremely smooth. Its subtle perfume was not found in the liquor, but rather on the bottom of the empty cup...there lies a treat for your nose!

The packet of 25 grams doesn’t go a long way. There is only enough left for 1 more session. Is it worth the price? Insofar discovery is concerned, I think so.

Thanks for sharing this special experience.

Interesting that MarshalN just mentioned that he stuffs the pot with Yancha, Brandon (in a comment there) mentions a third of a pot, and now you mention one half. I must say, that is some enormous variation!

Yes, it's all just a personal preference, as I mentioned in the post. I didn't know how this old tea would behave, so I was being conservative. In hindsight, this Shui Xian was mild enough that I think filling the pot 3/4 or entirely would have been alright (for me). But then again, that would've consumed the entire 25gr and not leave any for another try...unless I buy more :)

Phyll, your froggy cha chong has broken stand or it should be like this?

My daughter played and dropped it on the kitchen floor. The frog survived the long, hard fall...but the bottom half and front half were broken. It still accompanies me whenever I drink tea...sentimental reasons and it's got nice patina to it already. This is an old pic that I could find when the froggy was still rather new and intact.

Wonderful It is!!I could not think any other phrase for this.And views about all varieties such as loose leaf tea, oolong tea etc are fantastic.
I do follow your posts.Please keep posting your views on teas regurarly