Disclaimer: please use good judgement before attempting the method written below.  The risk of damaging your pot exists, and I assume no responsibility.  This post was written as a note on my do-it-yourself attempt to fix the pot  – and to convey ideas to others.  It is not written as an expert's instruction.

§ FACTS
A recently acquired late 1980’s Factory 1 shuiping teapot, 110ml in volume, single-hole filter does not pour well.  The stream pours thinly and often sputters out of the spout.  Further, when the lid is placed (gently) to close the pot’s mouth, an excessive amount of tea water spills out of the pot due to pressure from poor air exchange.

§ ISSUES
Upon inspection of the air hole on the lid’s finial, it is apparent that the airway is partially blocked by clay.  The partial blockage cannot be removed by simple means, such as blowing air into the hole or using a thin toothpick to push the blockage out.  Evidently, the blockage is an original part of the lid’s structure itself (i.e. it’s not a foreign object to the pot), and it is highly likely due to the manufacturing of the pot.

§ OPTIONS
(√) Do nothing, except to raise the lid slightly while pouring to allow air exchange to occur better, thus speeding up the pour time.

(!) Use a jeweler’s needle file.  However, the smallest needle file was found to be too thick to fit through the finial’s airhole.  Damage to the pot is highly likely.

(!) Use a sewing needle, a toothpick, and other probes that fit through the airhole are not strong or sturdy enough to clear up the blockage effectively.

(√) Use a string-like tool with a rough surface and small enough gauge/width to fit through the airhole (and navigate around the blockage) to file away the clay bits that is blocking the airhole.

§ CHOSEN SOLUTION
A string with a rough surface was employed.  A stainless steel cable designed for hanging picture frames was inserted through the airhole (see photo below).  The texture on the steel cable is not rough, but it is rifted due to being manufactured by using several smaller cables, twisted together (see photo above).  Upon insertion of the cable, a gentle back-and-forth motion was performed to file away the blockages.  This motion was done while at the same time turning the lid slowly in order to file the entire inner surface of the airhole.  After the filing was done, a camera dust blower was used to force any loose clay and dust out of the airhole. 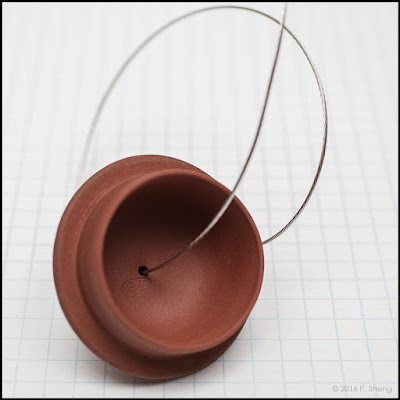 § RESULT
The attached blockage was filed away successfully.  As a result, the pot pours as it should be: much swifter and smoother than before.  Further, placing the lid onto the pot’s mouth does not cause water to spill out [as much as before] anymore.  No damage was caused from this procedure.

§ CONCLUSION
Consider the risks of unintentional damage to the pot before proceeding.  You may not want to do this to a highly valuable pot in case of accidental damage.  Please read the disclaimer on the top of this post.
by ~ Phyll on 2:46:00 PM

I recently acquired an 80ml pot very similar to that and had the same problems. Never thought to check the lid. Thanks!

Let me know what you find out. Thanks.

I used your technique and it pours much better

I'm glad to hear, Julian! Thanks for sharing.