When my wife and I have guests at our home, serving tea is a part of our customs and something that requires a bit of thinking ahead. As overzealous hosts we often prepare meals in courses (and always too much). It is usually right before desserts that a mini dilemma would set in: What tea to serve and how?

In our home, desserts are almost always accompanied with tea. I generally am not in the habit of offering my guests any digestif or dessert wines, though should the mood strike I always have a ready supply. Tea is still my – and my wife’s – preference after a hearty meal.

Since we have banished teabags from our home, and since I have gifted – or burdened – myself with many types of loose leaves, the act of serving tea has become a bit more complicated than shoving a box of Twining’s Variety Pack on the table. As such, there are 4 considerations that I think about before deciding the most appropriate action. Do keep in mind the setting is a casual gathering with friends and family, and not a tea tasting session:

Firstly, how many guests are present? If more than 6 people are to be served, then our 32oz teapress gets the job. The tea that goes in it will be something that I keep in quantity. These are decent teas, but they are not among the best I own (may the Gods of Graceful Hosts strike me in anger!). By habit and personal preference, I only brew my best teas in a Yixing clay pot or a gaiwan. With too many guests present, however, I rarely find it worth the hassle to start a gongfu tea process.

If there are 6 or less people, then I would consider bringing out my treasured teas and accoutrements. It all depends on a few other factors.

Secondly, what are we conversing about? This is as important as the first consideration above. If we are in a very engaging conversation, then the large teapress still wins the assignment (exception: if the guests are gongfu tea drinkers – see the 3rd consideration below). However, if we are talking about Britney Spears, Donald Trump’s hair or other mind-degenerating topics, then my fantastic tea and utensils may just get to rescue the day. 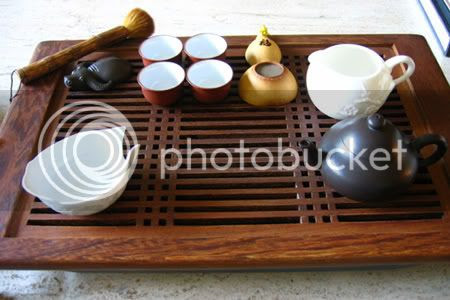 Thirdly, to gongfu or not? With guests who are not acclimated with this Chinese tea ritual, I would hint to them of the possibility for a tea tasting. The process tends pull everyone’s attention and topic of conversation towards itself. It is a great way to enjoy tea, but I feel the ritualistic and meditative qualities it projects do not suit all occasions.

To those who know about my little tea obsession already, I would unabashedly offer them the pleasure. The narcissist in me always wants to get the tea set out; especially if the guests admitted to never paying much attention to the tea they drink. But the realist in me checks to make sure that I am not about to impose upon anyone or to unnecessarily shift the overall mood of our gathering.

Lastly, what tea to serve with the desserts? There is no simple answer for me because, as I mentioned above, there are many types to choose from. I believe the desserts being served should play as the main anchor. With heavy tasting desserts such as tiramisu, creme brulée and chocolate cakes, I would gravitate towards a heavier tasting tea (“nong xiang” – highly oxidized, may be roasted) to match like Red Keemun, Lapsang Souchong or highly roasted Wuyi and Tieguanyin oolongs. With fruity desserts such as fruit tarts, key lime pie and Pavlova, I would opt for Darjeelings, lychee red or highly oxidized oolongs such as Oriental Beauty and Taiwanese “hong shui” (red water). I would accompany fresh fruits and the lightest desserts with greener oolong’s (“qing xiang”, low-oxidized and non-roasted) that have sweet, delicate floral and grassy notes. White, green, and Pu’er (raw and cooked) teas are not considered to accompany desserts, as I think they are best by themselves.

As with foods and drinks, of course, preferences are exclusively personal, and mine is derived from the mental notes I have gathered through pairing things out experimentally. There are no rules, which make the whole process much fun for the hedonists among us. My main objective is to bring about the most enjoyable setting for everyone sitting around our dining table.

A great article, thanks.

As I read it, and remembered an article on tea-and-food pairing in the Pu'er LiveJournal, I realised why this has never been a concern for me: I would get seriously "Shaolin'd" if I were to serve tea during dinner, from my dear, gentle wife. The concept of drinking tea while eating food is so off the agenda, that I didn't even notice that I haven't considered it before.

The usual reasoning was "ancient and glorious Chinese wisdom" (tm), that, so I am led to believe, says that taking tea with food will lead to digestive problems. There is a minimum mandated window of time that must elapse after a heavy meal before I am granted authority to fire up the tea-kettle - it reminds me rather of my mother mandating a similar minimum time on swimming after a meal, ostensibly for the same digestion-based reasons.

However, I have noticed that this aforementioned "ancient and glorious Chinese wisdom" (tm) breaks down in the presence of a good Port.

That said, after the minimum time-frame has elapsed, a heavy, aged shupu does do wonders for my digestion - I'm sure that's common practice.


Thanks again for the article, and toodlepip,

Chinese and Japanese restaurants usually serve tea for free to go with the food, granted they are not prepared gongfu and often subpar. Do you drink the tea at these restaurants?

I have heard of such Chinese wisdom of not mixing tea together with food, and I generally don't pay much heed to it -- perhaps to my future detriment. It is a rather strict discipline on tea consumption. My tea drinker aunt generally warned me not to mix tea with fruits.

I was a very close student to a traditional Chinese doctor (shin-se) who was also a martial arts master. He and I often met early in the morning for some bakut teh (a Chinese dish of pork ribs in soup) accompanied with high fire gongfu tea from his personal stash. The hawker of the bakut teh stall provided the Yixing pot and cups (talk about very seasoned looking Yixing pots they got -- rich with patina!).

After a strenous traning, we often ate together and then went back to his clinic for more gongfu tea and a lengthy discussion on Buddhism and meditation. The only warning about gongfu tea from him was to not drink it on an empty stomach.

A good port is indeed sublime! And aged shu pu'er really does wonder after a heavy meal. :)