The following is a side-by-side comparison of the popular 2001 Mengku Shuang Jiang Factory's "Yuanyexiang" (also spelled "Yuan Yieh Xiang" or simply “YYX”). The leaves of this compressed tea came from the Mengsa Mtn. Proper (Mengsa Zhengshan) in Yunnan Province.

Yuanyexiang is another successful project by a well-known Hong Kong tea merchant, Mr. Chan Kwok-yee of Best Tea House, who popularized the the dry storage method of storing pu'er. With this tea, Mr. Chan decided to store some in a dryer condition and some in a more humid environment. Upon introduction into the market, the Yuanyexiang were distinguished by the 2 methods under which they were stored in. The dry-stored version is identified by the thinner paper used as its wrapper, while the wet-stored version by its slightly thicker paper wrapper. (See pictures below for more details).

As the term implies, dry storage is literally a method of storing teas in a dryer environment, though not exceedingly dry either. Wet storage, on the other hand, is the storing of teas in an environment of increased humidity. The main objective of wet storage is to accelerate the fermentation of the leaves so as to produce mellower, sweeter and smoother tea (generally more approachable to drink) in a shorter period of time. The 2 methods create significantly different end-products, and it shows very clearly by tasting the Yuanyexiang teas. The majority of opinion seems to indicate that the dry-stored Yuanyexiang is the better of the two versions. I agree to a certain extent, though with a slight reservation, which I will elaborate further in the second last paragraph of this post.

Side note: the wet storage (Shicang in mandarin) treatment is perhaps also referred to as "traditional storage" to dispel the negative connotation associated with the term. The general consumers tend to misconcieve the term "wet storage" as something shoddy and unhealthy, partly (and fairly) because many shoddy teas are produced through a poorly controlled wet storage method. This in turn lend the term an ill-interpretation to the everyday consumers. In reality, however, a well-controlled wet storage by knowledgeable tea professionals can yield wonderful results that is harmless (and perhaps beneficial) to one's health. (Disclaimer: I am not a health professional and, therefore, can not back my opinion with hard scientific facts) 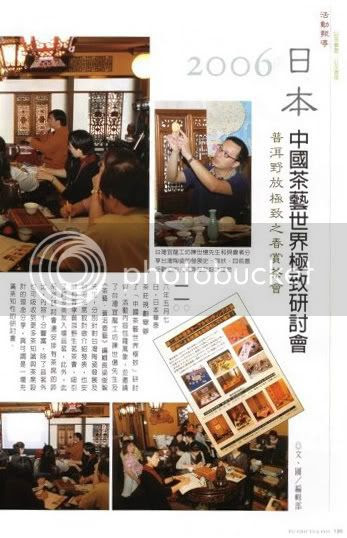 The popularity of the Yuanyexiang is partly borne out of a publicized tea tasting session in Tokyo, Japan, where 3 very highly regarded pu'er were tasted and judged against each other (as featured in the Puerh Teapot Magazine vol. 16). The story goes that the Yuanyexiang came second after the 1999 Yi Chang-hao and bested the excellent 1999 Menghai "Green Big Tree" black label (personally, I think the Menghai "Green Big Tree" is slightly better than the YYX).

Echoing the general pu’er market and Yuanyexiang’s own growing popularity among tea aficionados, collectors and investors alike, the price of the Yuanyexiang has moved up quite significantly in the past months. In early January of 2007, Best Tea House in Hong Kong sold the dry-stored version for RMB 650 per 357gr beeng (USD $86 at the current exchange rate) and for RMB 500 each if you buy 10 jians (840 beengs). The same tea currently is priced at RMB 880 (USD $117) per beeng and RMB 600 at wholesale quantity. This translates to a 35% and 20% increase per beeng and wholesale, respectively, over the past 8 months. The online Chinese auction site Taobao listed the dry-stored version for RMB 600 per beeng back in early January, and it is currently offering the same tea for RMB 900; a 50% increase! On the contrary, MarshalN, who has a closer touch with the tea market in China, informed me that the dry-stored YYX can still be had for much less than RMB 600 per beeng. 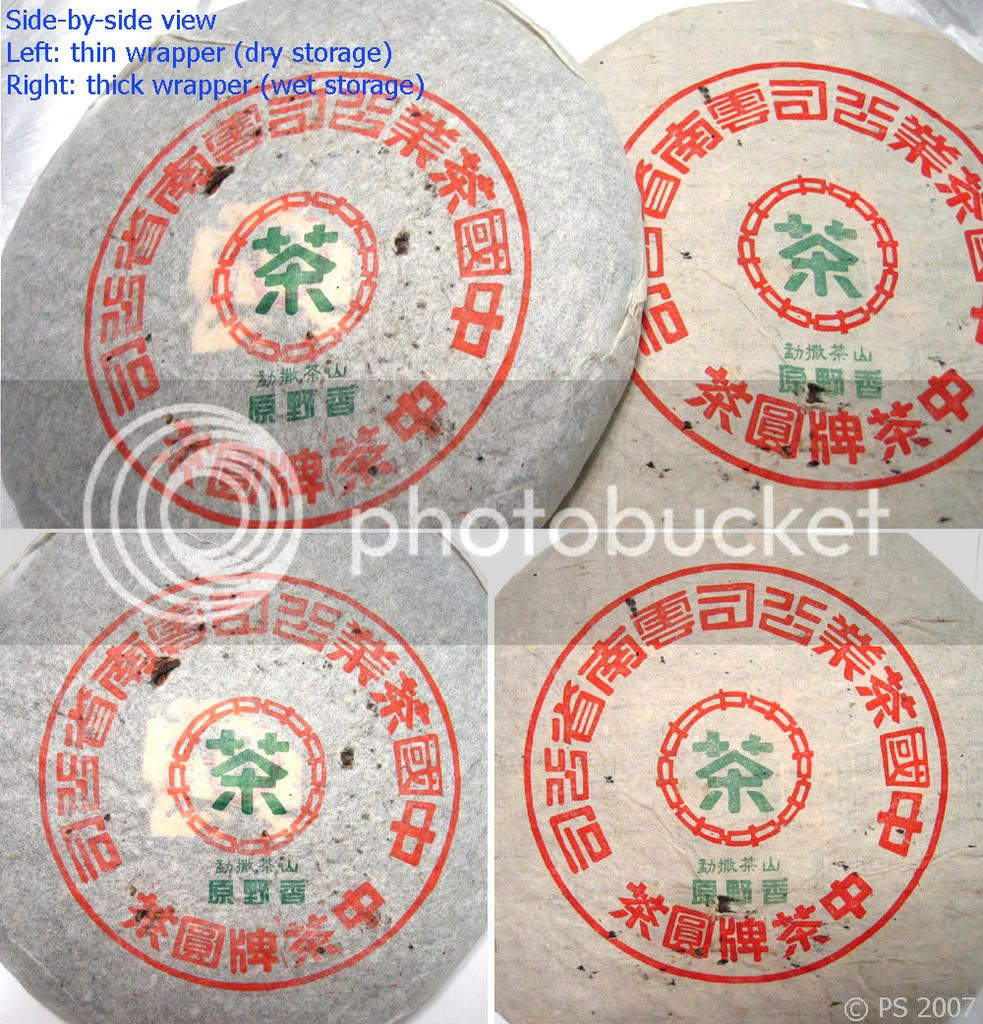 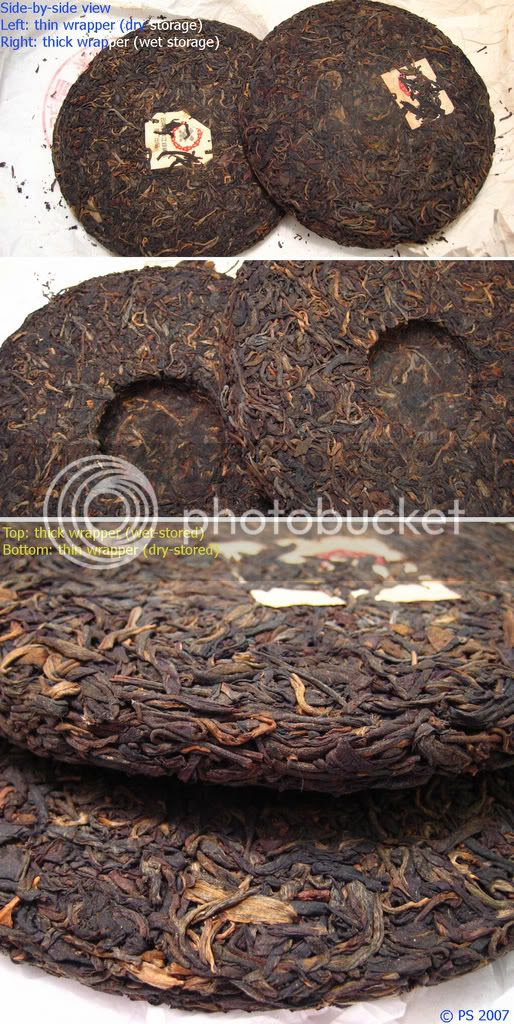 ^ The pictures above probably do not very clearly show the differences between the dry and the wet-stored versions. By naked eyes, however, the wet-stored version is noticeably redder / browner. The most obvious indication that one of them was subjected to a wet storage condition is the presence of very thin, white coating throughout, but most obvious on the top-middle section around the neifei (inner paper ticket). 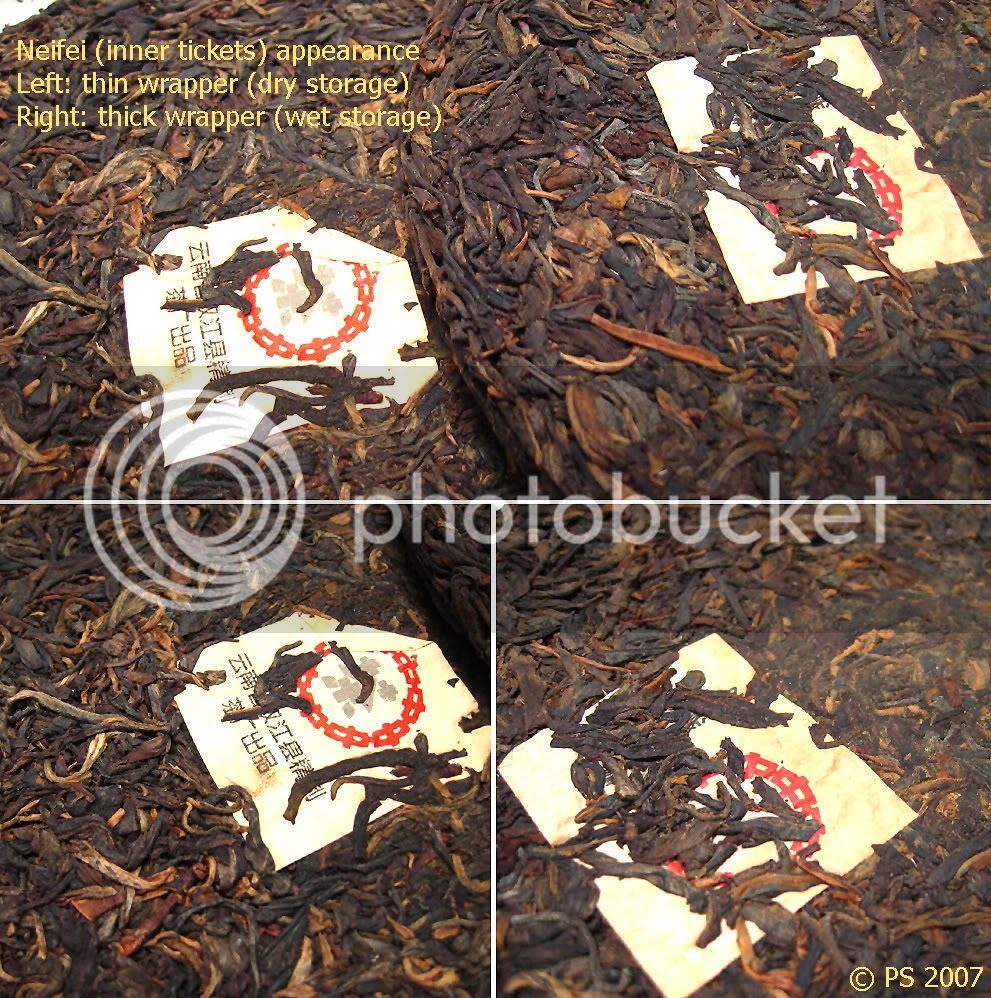 The 2 teas were tasted one after another; meaning that I finished a session of 10 infusions, rested for an hour or so, and then continued with the other tea. I thought this would provide a fairer impression of each tea. The parameter applied were exactly (or very nearly) the same for both teas. 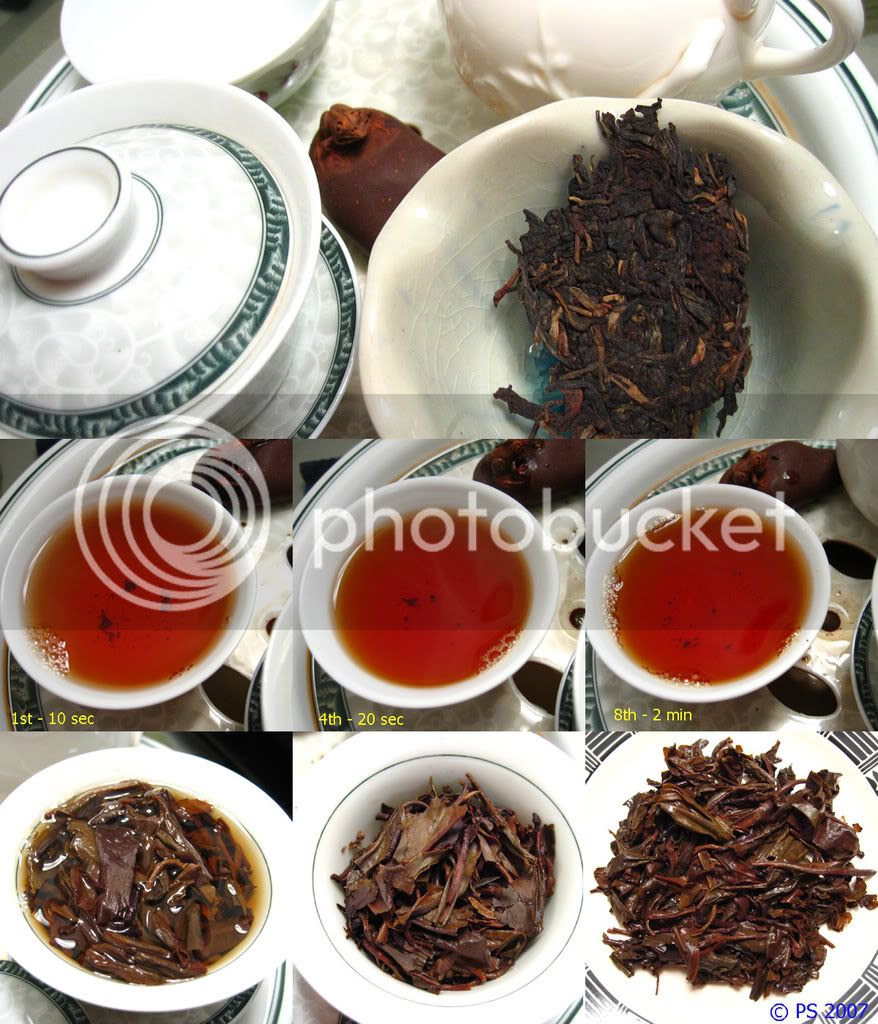 Dry leaves: the nose is sweet, mellow, plumy, woody, incense-like with a mushroom-y note on the lower strata of its aroma.

The clarity of the liquor is crystal, which is very promising (all the high caliber pu'er teas that I have tasted consistently had crystal clarity). Earlier infusions (1st and 2nd) exhibits a mild Chinese medicinal qualities. It is slender bodied, clean-tasting with a smooth texture.

The tea started to sing melodiously by the 3rd infusion and continue on until the 7th, providing ample complexities. The medicinal, woody, mushroom-y, and the slightly greenish qualities are lively and balanced. Medium body, extremely smooth, and almost non-existent astringency (feels like thick water in the mouth). The camphor-like nose started to appear around the 4th infusion.

Around the 8th infusion, the tea turned rather watery, and it was downhill from then on. In retrospect, I employed rather long infusion time to achieve a concentrated ("nong") result in evaluating both teas. I think with a 50% shorter infusions, as I usually employ with other pu'er, I should be able to get a few more infusions out of the tea.

For what it's worth, this tea reminds me very much of the excellent 1960's Bazhong Huangyin, especially the Chinese-medicinal taste.

4 stars (vg), with great potential to improve with age and proper storage. 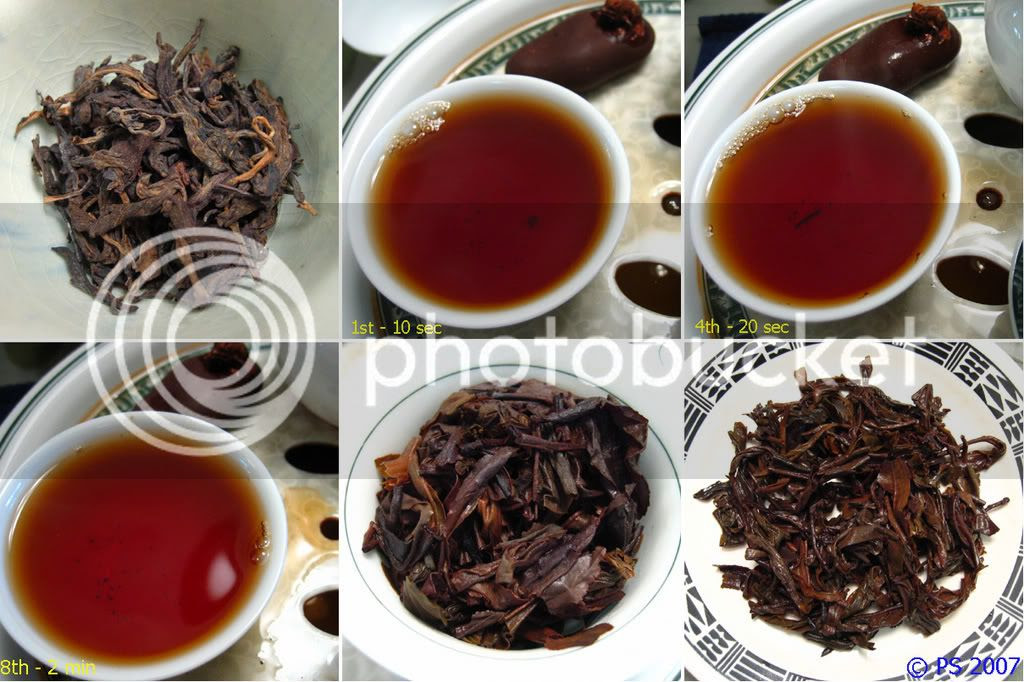 Parameter: as applied to the dry-stored tea.

Dry leaves: aroma of damp wood and earth and slightly medicinal. Simpler and rather one-dimensional.

The brews throughout the 10 infusions I had were much deeper reddish-brown (as you can see from comparing the pictures above). The taste of this tea was rather simple overall and significantly less complex than the dry-stored version. However, this tea had a rounder body and thicker overall mouthfeel, as wont wet-stored teas. Surprisingly, the tea felt a bit more astringent on the tongue and mouth than its dry-stored cousin, which was very clean-tasting. The camphor-like aromas also appeared around the mid-infusions.

The 2 advantages of this tea over the dry-stored one is its better brewing durability and fuller overall body. This tea was able to brew well beyond its 10th infusion with the same brewing parameter as the other one.

I mentioned above that the consensus of opinion seems to indicate that the dry-stored version is the better of the two. While I agree, I also think the wet-stored one has the potential to improve in a good way, too. To draw a parallel, I am quite certain that at some point the 1960's Bazhong Huangyin that I enjoyed very much went through a period of traditional storage. So why won't it be beneficial for the Yuanyexiang in the long run, too? Granted that it does not taste as complex as the dry-stored one today, it may still show itself up later down the line with proper storage. Who knows until then?

At this moment, however, I am giving the wet-stored version a 3-star rating (good) with my sincere hope that it will age with grace and improve.

Another good article, thanks. I was searching Taobao for this last month, and the price ranged from 420 to 500 RMB [approx. $60-$70, of course]. These prices were not listed (usually the vendor lists 600 RMB), but are usually available via 'phonecall (so says Lei).

If you're buying in quantity, I'm sure you can get them below $60.

Tempting! How much is shipping? Are they reputable vendors?

My mention of Taobao was in regard to the link below. RMB 900, and the picture indicates it's the thick-wrapper version (gasp!).

I think I have "enough" of the thin-paper for the moment, so I won't be considering for more. A person wiser than me wrote recently: "Sometimes, it feels right not to try and own everything we want."

Phyll, your pictures are starting to look like Cloud's for some reason. :)

I have never seen the thick paper cake in person, but I think the thin paper cake is not what you might call "pure dry storage" either. Rather, it should be, in this case, "less wet storage than the thick paper", because I have seen more than a few examples (from multiple sources) where the thin paper has some white stuff on it -- just not that much in totality. The wet leaves and colour of the brew also indicate some passage of time in a wetter environment....

Not that it's a bad thing, just something to keep in mind, IMHO.

After posting the article, I thought the images are (unintentionally) Clouds-esque, too.

The dryer-stored beeng (pictured) is clean -- no white stuff. I wonder if some of the thin-paper batches from BTH are wetter-stored than others. Is it possible that the ones you've seen (or owned) were subjected to a wetter storage by third-party vendors / collectors?

Really? I thought I'm seeing a whiff of whiteness on certain individual leaves -- certainly not throughout the cake, but on a few leaves, on your picture?

That's the extent of the whiteness I'm talking about of the thin papered ones -- just a touch of white in small parts.

There are ways to clean those up should one be willing (basically by brushing it with a toothbrush).

So I looked at the whole cake again (thin-paper) and was hard pressed to find any white stuff. Yes, there are some whitish coatings, but they are very subtle. There is no doubt the tea was stored in a rather humid condition, but still dryer than the thick-paper version, as you said.

Do you know the humidity % of "traditional Hong Kong storage?"