This is my first "test run" for the 2005 Chang Tai Factory Pure Ancient Tree, Yiwu, Pu-erh. The purpose of this tasting is to find out if I've just bought a lemon or something nice that I can keep long term. Purchased from Yunnan Sourcing LLC (see blog dated 5/10/2006).

Dry appearance: large, long, whole leaves that are very dark green to blackish-green, many are hairy. A few leaves are silvery and hairy. Quite nice looking. When broken, the inside is filled with whole leaves too, indicating a consistent quality througout. Each beeng (cake) is 100gr small.

TN: Bright orange-yellow liquor. The most obvious characteristics of this tea is the mélange of camphor, floral, pleasant green alfalfa (?) and some yellow fruits. A very nice perfume overall. It really opened up by the 4th infusion, when all aromas became better focused. The liquor itself is quite mellow and friendly -- it does not act like an uncivilized brute with the astringency or the coarseness often found in a newly released pu-erh. Light to medium body as well as cha-chi. Fine dusty tannin. A floral aftertaste, and it hasn't developed any sweet aftertaste. 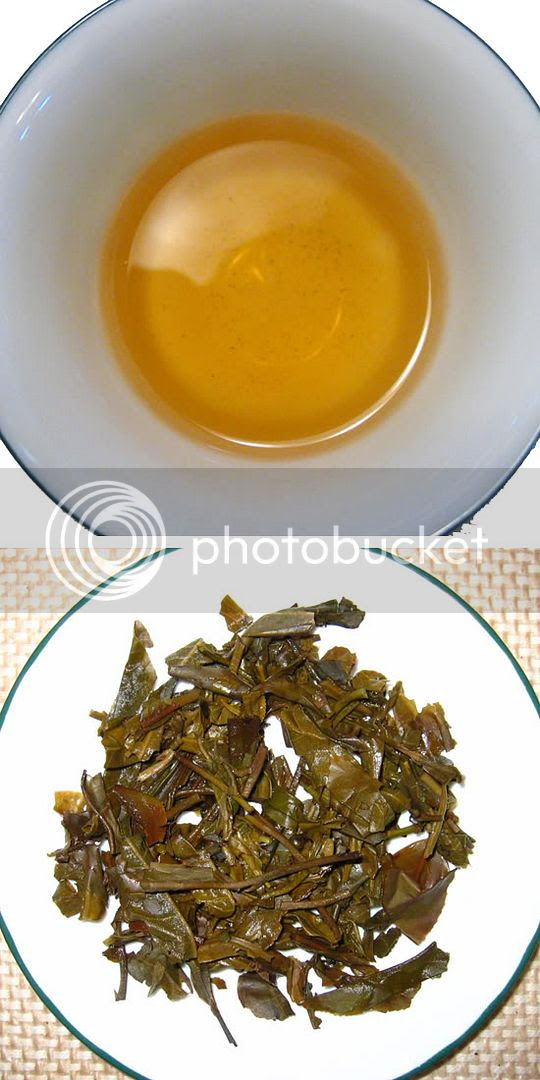 I wonder if this tea is going to age well or should be consumed when young. My feeling and evaluation from this tasting is that this tea is better consumed younger, though I plan to keep an ample amount for consumption beyond 7 years of aging. Somehow a few sips of this tea gave me an intense caffeine buzz that I usually get from 2 shots of espresso.


From the Vendor's Text:

Chang Tai Factory has been producing Pu-erh tea cakes since the 1990's, most of which have been directly exported to Taiwan, Hong Kong and Singapore. A favorite among collector's of premium Pu-erhs and often voted "best of pack" in Pu-erh competitions.This cake is pure unblended ancient tree sun-dried pu-erh from the Yi Wu mountain in Xishuangbanna. In recent years the demand for pure ancient tree pu-erh (especialy from Yi Wu mountain) has grown exponentially. Consequently the price per kilo for "mao cha" (sun-dried pu-erh used for making compressed tea cakes) has risen quickly. his is an excellent cake and represents the unblended taste of Yi Wu.

Hey, looks nice. I'd think it looks good for aging, but it's good to know it doesn't taste like crap right now. This is actually one of the things on my "to try and maybe buy" list for China. Now I'm a little more confident.

Not too bad, indeed, MarshalN! The reason I think it might be best when young is because of the light to moderate cha-chi. Perhaps my perception is skewed since I've just tasted the Mang Shi melon pu-erh just recently, which was a pretty strong pu-erh. I got 8 rounds with 10s 10s 20s 30s 45s 60s 90s 120s method.

Have you tried leaving it in the pot? Hmmm, I guess not, since you took pictures with it. After 7-8 infusions I usually just pour water in and leave it for half an hour or something, it's still very drinkable a lot of times. The ones that truly die are the ones where this doesn't give you much beyond coloured water. From the sound of it though, this isn't one of them.

I'll have to get my hands on one and see for myself what this is like.

I'll try that next time! After the 8th round with 2m infusion time, I decided just to make a light brew out of what's left to wash the pot with and take pics of the leaves. It definitely had not completely "died" yet. Thanks for the suggestion!

How many did you purchased? For me, this tea will be good aging. If you have 3, try the following and might also be the ans. for your storage question:

Compare the 3 after 5 years. My guest is, the 2nd will taste full and develop, but not refine. But in 10 yrs. the Sealed third will be a very fine Bordeaux, since yiwu is the best in aging. (my opinion)

I do have the same bing, will do a report to compare.

Thanks for the guidance, Toki. I have 10x 100gr beeng (well, now it's more like 950gr left). So I have some room for that kind of experimentation you suggested above.

Saw this at T-gallery today. Michael Plant brought over 2 for tasting.... Good leaves.

Its strange. I bought some of this tea and found it very tasteless. I also saw another post on the net which said that YS had managed to get some fake tea by mistake (an honest mistake) in this case, and after tasting my tea I wasn't surprised by that.