Yesterday, after a simple lunch, I prepared the water to brew the 1960’s Guang Yun Gong. It was to be a handsome treat after an entire morning of running errands and shopping for groceries.

With the very little sample I got, I inspected the dried leaves carefully. I have apparently received a small chunk from the rim of the beeng and some loose leaves, which were intermixed with stems and twigs. A thin film of whiteness and some white spots here and there were present, an indication of wet storage. Then again, Guang Yun Gong is a "lightly cooked" type of pu’er, so perhaps this was expected. I could detect little smell, almost none. When thrown into the warmed up gaiwan, the heated dry leaves gave off faint aromas of earth, wood, black licorice and herbs. It was neither expressive nor impressive, but such is the nature of old pu’er. The reward often lies within its liquor, if the tea was any good.

I gave it a quick 5 seconds rinse and the tea water looked very promising indeed. Its color and clarity were excellent throughout. I let the leaves rest inside my gaiwan, lid closed, for a minute or slightly more, allowing the steamy banya to wake them up from their 40+ years slumber before the first infusion. 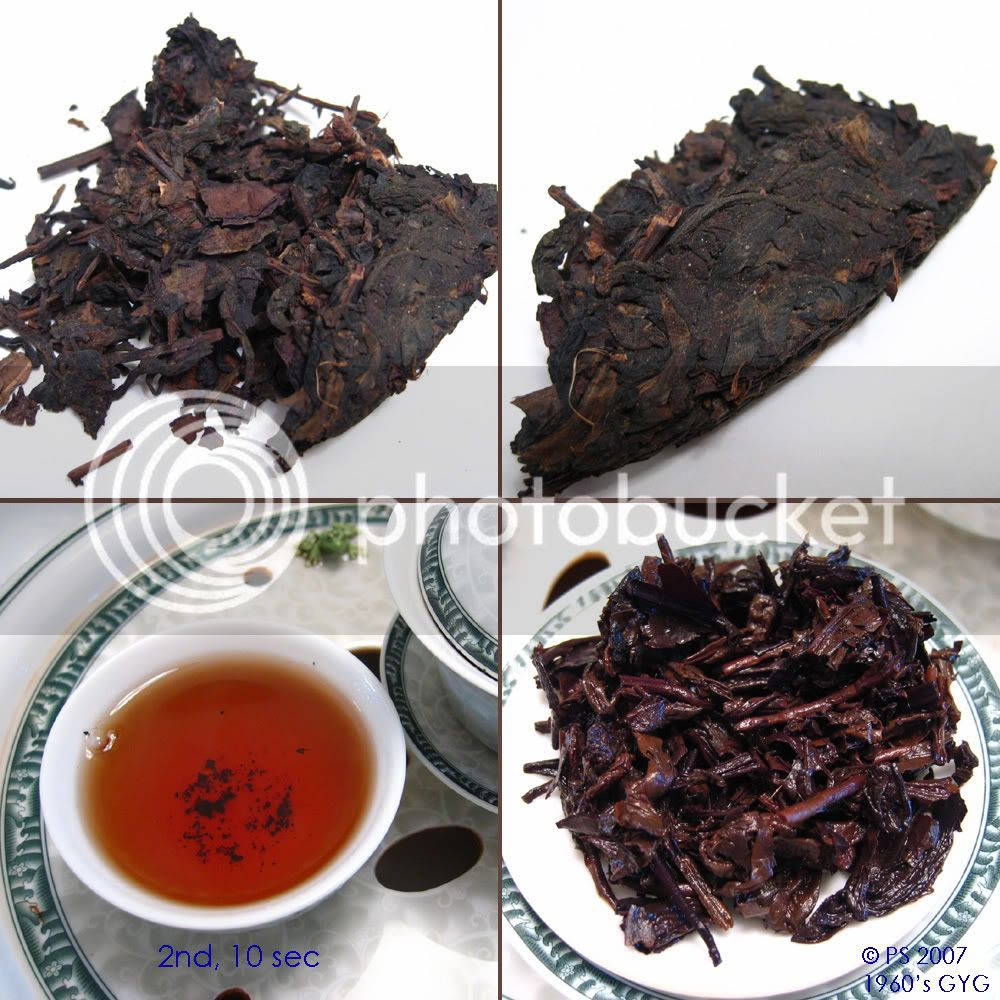 I had a total of 11 brews, by which time it was on the brink of giving up. Not very durable, in retrospect. Throughout all the infusions, the tea tasted rather simple, clean and smooth. In fact, I can’t say that there was anything special from its taste. A little bit of earth and wood, thin bodied, with a slight sweetness in the mouth and finishes a bit mint-y. To sum, it tasted ordinary.

What it lacked in taste, however, was very well compensated by its strong qi and the way it made me feel physically. The first brew shot tingling sensations around my lower back and neck. The second warmed my shoulders and front. The third hit my head pretty hard. And by the fourth and fifth, I was sufficiently swimming in clouds. I felt quite tea drunk and high! It was a sensation I rarely get from merely 5 infusions, especially with a filled stomach after lunch. Conventional wisdom says that tea should not be drunk on an empty stomach. Should anyone have the desire to break this rule, be forewarned that this is not the tea to do it with.

I savored each cup slowly. On and off, I wandered about the events surrounding the decade in which the leaves of this tea were harvested. China was at the beginning of the cultural revolution, while in America, the sexual revolution was hitting high (wonder what Woodstock was like). The Indonesian communist party, allegedly supported by the Chinese embassy, unsuccessfully attempted a coup d'état against the then-present government, which resulted in the discriminatory anti-Chinese legislation. By the directives of the government of Indonesia, the country cut all ties with China. The Chinese diplomats were "deported" and the embassy shut down, no flights were allowed to and from China, Chinese schools were closed, Chinese books and publications were banned, and most out-reaching of all, I think, Chinese names were no longer allowed in the birth certificates of the children of Chinese immigrants. And then there were the war in Vietnam, The Beatles, the assassinations of JFK, Malcolm X and MLK, man on the moon (faked?),….

It is pretty amazing to think I was sipping a tea that came from an era I know only through stories that my elders told me, from books and from films.

At the end of the second cup, I grabbed from the bookshelf a book that arrived a few days ago: Liquid Jade by Beatrice Hohenegger. I skimmed through the Acknowledgement and the Preface sections quickly, and by the time my third brew was in the cup, an old tea poem greeted the first chapter: 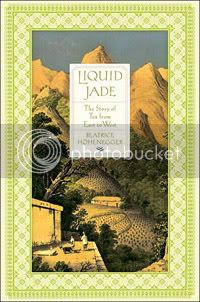 On the peaks of Mount Ling,
a wondrous thing is gathered:
It is tea.
Every valley and hill is luxuriously covered
with this wealth of the Earth,
blessed with the sweet spirit of Heaven.
In the month of the harvest moon,
the farmers get little rest.
Couples at the same task, searching and picking.
take water from the flowing river Min,
drawn from its pure currents.
Select vessels and choose ceramics
produced from Eastern Ou.
Emulate the example of Duke Liu:
Serve tea with a gourd ladle;
In only this way can one begin to perfect
thick froth, afloat with the ‘splendor of the brew:’
Lustrous like piling snow,
resplendent like the spring florescence.

Four pages later, a quote from the Pen T’sao Ching, a medical book touted as one of the earliest in China:

Hmm, the very tea in my cup had leadeth me to intoxication.

That quote compelled me to stop reading at the moment. Another pro-tea, anti-wine opinion in a tea book within the first chapter, much like Okakura's The Book of Tea. I’ll pick Liquid Jade up again soon – for it has piqued my interest – perhaps with a glass of Chateau Musar in one hand.

It's a slippery customer, is it not? I thought that it would last a little longer than it did, too. Certainly, it was enough for me to revise my rash half-thought of grabbing a bing - which would have potentially made me rather unpopular with Xiaomao... :)

Thanks for the great notes as always.

Ah, the shot down the back. It's a great feeling. I've had it a few times, most recently (and most obviously) with a DHP I've had.

Hobbes -- I almost made it a birthday gift to myself. Now, I think I'd rather have that digital SLR camera. Your tasting note on this same tea is phenomenal!

Marshaln -- I never experienced that sensations from a Wuyi tea as of yet. Was it an aged DHP that you had?

Only slightly aged, I think the tea itself is good, that's all.